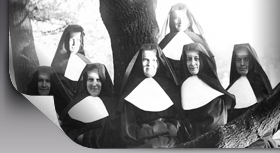 “A backward glance over close to 70 years reveals how sincere and warm was the welcome extended to Sisters Vincent Donnelly, Baptista Hussey, de Sales Weibel and Cecilia Malloy by the great-hearted people of Lawler, that beautifully located inland Iowa town, on September 15, 1882.” This description in the annals by Sister Benedict Murphy in 1949 begins the story of the Presentation sisters in Lawler.

Just over two years after the death of Mother Vincent Hennessy in 1880, Bishop Hennessy, “peerless advocate of Catholic education,” again requested sisters for a new school in his diocese. Four daughters of Nano Nagle were sent to bring the Gospel message to a new group of students.

With Sister Vincent in charge, the new school opened its doors in 1882 with an enrollment of 70 pupils. The two-story frame building consisted of one long room on each floor, accommodating both grade and high school by 1892. It sent out its first graduating class in 1897. To relieve crowded conditions, a new brick building was erected in 1899 which served the students until 1919 when a fire destroyed the upper floor. Not to be daunted, the parishioners rebuilt the second floor and added a third floor as well. The high school was discontinued at this time.

Another fire on December 21, 1963, threatened the existence of Catholic education in the area. At 8:30 a.m. on a Saturday morning, the sisters smelled smoke and looked in dismay at the black cloud rising from the school building. According to one source, two book cases and a record file were the only things saved from the inferno.

The sisters considered themselves fortunate in that they had taken the choir music for Christmas Mass to the church earlier, and enough copies were available for all who wished to participate. An account in the parish centennial brochure states, “The new Mass rendered by the choir of the Catholic Church on Christmas was beautiful. Much credit is due to the Presentation sisters for the choir’s excellent training.”

A massive cleanup began even though the future looked bleak for the re-opening of school in the new year. The fortunate purchase by the parish of a nearby vacant public school building gave new vigor to the efforts of the local people, and the sisters from neighboring towns, who rallied to clean, furnish and ready the building so that classes could resume as quickly as possible. Many hours were spent copying charred records and replacing supplies, while textbook companies cooperated to supply lost textbooks quickly. Amazingly, class sessions resumed in the new setting January 8, 1964, only two days later than the original school calendar dictated. The school was to continue serving the parishioners of Lawler until 1969, with 96 Presentation sisters having been part of the faculty over the years.

Difficult times in the early days of the parish gave rise to the tradition of generosity toward the sisters. Every fall parish members went door to door collecting potatoes, meat, vegetables, lard, wood, money, anything to supplement the meager supplies at the convent. This tradition of giving extended into the better years when Presentation Day became the occasion for bringing gifts to the convent.

Sister Agatha Murphy, the first postulant from Lawler, entered the Presentation community in July 1883. Her answer to God’s call was only the first in a long line of vocations to come from Lawler, which saw 55 women enter religious life and 12 men ordained to the priesthood.

Sister Eugene Goss recalls her years attending Our Lady of Mount Carmel School, “The school was the seat, center and heart of Lawler for kids growing up, any age, Catholic or not.” She has vivid memories of Sister Marie Celine, who was always on the playground with the students, acting as umpire for their ball games.

She also recalls fond memories of winter fun. “We haunted the convent in the evening, waiting for the lights in chapel to go off signaling the end of prayers, so the sisters could come out and sleigh ride with us. The prominence of the black fringed shawls and flying veils said much about the sleigh riding on Eickhoff Hill, not to mention the habits getting caught under the runners of the sleds. We loved to have the sisters join us.”

Other pupils followed other pursuits for which they were well equipped by the education they received at Mount Carmel school. One example is that of Art Winter, founding editor of Praying magazine. He says in a letter dated October 17, 1996, to his fourth-grade teacher Sister Gertrude Schmelzer that, “Over the years, a highlight of our life has been returning to Lawler. About 15 years ago, we realized what great places small towns are and we began to wonder why we ever left Lawler in the first place.”

In 2001, Sister Louann Doering began her work as pastoral associate in the Servants of the Lord Cluster consisting of the parishes of Our Lady of Mount Carmel (Lawler), St. Mary (Waucoma) and St. Luke (St. Lucas). She conducted RCIA programs, helped with funeral plans, led wake services, visited homebound and care center residents and helped with community-building events. Her duties expanded over the years as several other parishes were clustered with the original three in order to provide services on a larger scale. Sister Louann remarked that the clustering was difficult for parishioners, who tended to retain loyalty to their own parishes. When Sister Louann left the area in 2007, plans were underway to design a six-parish grouping known today as Christ Our Hope cluster.

Lawler, Iowa, and Our Lady of Mt. Carmel School and Parish are true examples of a happy union between Presentation sisters and the people of God.

Left photo: Sisters who taught in Lawler in 1915.

Right photo: Our Lady of Mt. Carmel School in Lawler before the fire in 1963.