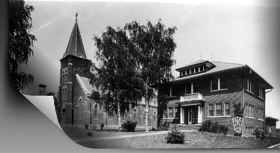 “In 1920, the Reverend Thomas Davern saw the completion of a parish school at St. Mary’s made possible by the generosity of Mr. Denis Hessian, who donated funds for its erection.” (Early Missions Annals #223C) Thus began the Catholic school system in Humboldt, Iowa.

According to an article in the Humboldt Independent dated March 14, 1996, Denis Hessian grew up poor and felt deprived of religious training in his youth. Having no wife or children, he wished to provide for other children what he lacked in his own childhood by giving money to build and maintain a Catholic school at St. Mary Parish.

The first Presentation Sisters to minister in Humboldt were Sisters Mary Joseph Kennedy, Evarista Powers, Gerard Murphy and Benigna McCarron. They arrived the week of August 20, 1920, and met their first students on August 30. An enrollment of 50 pupils in grades 1-10 bolstered Father Davern’s confidence that he had made the right decision in building a parochial school in an area where the Catholic population was in the minority.

The school began, as did many in that era, as a boarding school. The dormitories on third floor accommodated 20 girls and 20 boys. First floor served as the sisters’ quarters and the music room. Second floor was designated for use as school rooms.

By 1934, grades 11 and 12 were added to the school which received state accreditation in 1935. The four grades of high school continued until 1942. Today St. Mary’s serves preschool through sixth grade. A total of 94 Presentation Sisters ministered on the faculty over the years, the last of whom was Sister Louise Scieszinski who retired in 2010. A capable staff of a lay principal and teachers carries on the mission begun by the four pioneers in 1920.

In a speech delivered on the occasion of the 50th anniversary of the school, Former Student Joe Ennis praised the sisters for their “dedication and concern for the spiritual and material welfare of all students, their teaching by precept and example, of respect and responsibility, along with the other three Rs of education…” He commended early parishioners who took turns providing wood from their own farms to stoke the furnace, and whose children took their turns at janitorial services along with their fathers.

Sister Benigna McCarron related in an interview for the oral history archives that at first the original three-story school/convent building had two electric light bulbs: one in the bathroom and the other in the kitchen. Camp chairs served as pews in the chapel. Sister praised Father Davern’s generosity in providing needed items, food and even textbooks which he traveled to Chicago to purchase.

Sister deLourdes Verhey recalled forming lasting friendships in Humboldt, most notably with Dr. Beryl Michaelson who became a generous benefactor of the sisters. Sister Lawrence Mulligan, principal from 1960-1967, recalled the good relationships with public school officials, one of whom commented on the excellent quality of students entering high school from St. Mary School. To quote Joe Ennis “…the honor students at St. Mary’s continued to be honor students at Humboldt High.”

Card playing was a favorite pastime in the community, according to Sister Pierre Kollasch who dubbed her first mission, “my first love.” Father Fitzpatrick, pastor during her time at Humboldt (1948-1952), would play cards with Sister Roberta Burke and the other sisters on Saturday afternoons. If things got slow and players hesitated too long, Father would say, “Masses are at 8:00 and 10:00” to hurry things along. Sister Pierre also described an incident during her second tour at St. Mary’s in 1974-1975. A former pupil whom she had helped in first through third grade returned as an adult to thank her for her assistance, and he brought with him a chicken for the sisters’ dinner.

Another former principal, Sister Dianne Michels (1981-1989) added kindergarten and a computer lab, as well as shared time in grades 7 and 8. She expressed her admiration for the thriving parish community in which the Knights of Columbus and the Ladies’ Society worked together for both parish and school.

Sister Ruth Ann Takes described Humboldt as “a little bit of heaven” when referring to her work with adult choir, funeral choir and liturgy planning, along with giving private lessons in piano, organ and guitar.

The tradition of excellence in education and faith formation continues to thrive at St. Mary School.