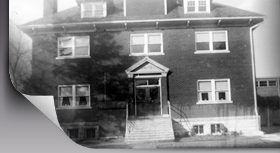 “No town is an island, but the town of Fairbank wouldn’t be without one.” Thus began an article in the Des Moines Register on September 3, 1978. This picturesque island lies in the Little Wapsipinicon River that bisects Fairbank at the west edge of the business district. It is accessible via a pedestrian bridge. Fairbank residents showed their pride in this unique feature when they organized fundraisers to save it from silting in and becoming part of the “mainland” in 1978.

It was to this small town that the Sisters of the Presentation came in August of 1907, replacing the three Holy Ghost Sisters who had been in charge of the school since its opening in 1895. The first faculty consisted of four classroom teachers and one full-time music teacher. Mother Presentation Griffin headed up the group, having as her companions Sisters Isabel Julian, Agnes Griffin, Genevieve Burke and Lucy Rogers.

These five sisters then began the task of providing education for students in eight grades and conducting a normal training course for prospective teachers. They soon recognized the students’ need for further education to qualify for a teacher’s certificate, and Mother Presentation, under the direction of Father W. T. Donahue, added the 10th grade to the school. By 1915, more space was required, and so the sisters moved from the school building into the renovated former rectory.

A fire in 1916 destroyed the original school, taking with it everything except some clothing, a few books and desks. Classes continued in a donated space on the second floor of a building downtown until a new building could be finished in 1917. At that time the rest of the high school classes were added under the direction of Pastor John Q. Halpin and Sister Mary Calasanctius Kelly. The first class graduated in 1917. Immaculate Conception High School was placed on the list of certified Iowa non-public schools in 1923.

In 1932 the school was re-organized according to the 6-3-3 plan. Kindergarten was added in 1933, but was discontinued in 1958 because of lack of space. Enrollment continued to increase, requiring a staff of six sisters by 1933. A badly-needed new building was completed in 1955, providing a parish hall, classrooms, kitchen, meeting room and stage.

By 1965, lower enrollment and greater academic demands prompted the high school to close, sending students to Sacred Heart High School in Oelwein. “Competition and pressure, plus finance, caused the Immaculate Conception Academy (School) to be discontinued in the fall of 1969.” (Parish History)

At a reunion in 1977, approximately 700 former students and teachers gathered in the parish hall for a reception, where they viewed class pictures and received a specially-prepared history of the town, parish and school. After-dinner speakers were former teachers Sisters Mary Ellen Murphy and Patrick Waldorf. They represented the more than 70 Presentation sisters who had been part of the school history.

Sister Mary Agatha Broderick, who taught in Fairbank from 1941-1947, told of the Irish-born sisters who were there in her time: Sisters Mary Grace O’Donnell, Alicia Howley, Antoinette Walsh and Anicetus Quinn. She talked about the small enrollment at the time, which left her with four girls and one boy in grade seven, and remarked about how hard she studied to keep up with some of the “wise ones” as she called the troublemakers in her class.

Sister Mary Margaret Donnelly, working with Paul Peters, then a student, on Christmas decorations in the church, fell through the grate onto the furnace below. Luckily, she was unhurt and able to walk away from the unfortunate incident.

One can expect pranks from children, and Fairbank students were no exception. Sister Mary Virginia Gereau told of the day she opened her desk to find a snake curled up inside. She calmly picked up the snake, said to the class, “Isn’t he cute? But I think we should give him his freedom.” She then released the snake out the window and had no more pranks that year.

The junior class of 1951 published a vocations pamphlet which included descriptions of works done by various religious orders, along with the distinctive clothing worn by many of them. It closed with the following challenge: “When you come out (on Easter) with your navy suit and accessories or your soft light tan mocs, remember that religious wear outfits that are becoming to almost anyone – maybe even you.”