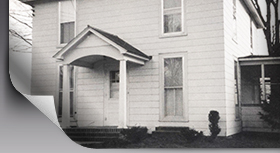 The histories of three northeast Iowa parishes and schools are closely related, and in some cases intertwined. The following narrative relies heavily on the history of each parish according to Monsignor Justin A. Driscoll’s account in “With Faith and Vision” (c.1967) to summarize the individual history of each place.

St. John the Baptist, Peosta: 1923-1993
According to Monsignor Driscoll, the school in Peosta opened in 1923. The earlier attendance center had been in Centralia, Iowa, and was staffed by the Franciscan Sisters of Dubuque.

In 1923 the Sisters of Charity, BVM, took charge of the new building in Peosta with 62 students. Growing to include all grades first through 12, it was accredited by the State of Iowa in 1928. Enrollment fluctuated over the years because of the Depression, and in 1933 the high school was closed.

In 1993 the Peosta center merged with Epworth, Placid and the Farley-Bankston consolidation to form Seton Catholic Elementary School. Grades third, fourth and fifth were assigned to the Peosta center, and the system was placed under the direction of the Sisters of the Presentation of Dubuque.

Another Presentation connection in the area was the Northeast Iowa Technical Institute School of Nursing. Sister Mary Rosalie Whalen was one of its nursing instructors from 1974-1989, according to records in the archives.

St. John, Placid: 1894-1993
Originally named Pleasant Grove, Placid was later named after the abbot of New Melleray Abbey. The first school building in Placid was opened by Reverend James Commerford in 1894. The Franciscan Sisters of Clinton replaced several lay women who had taught the children before that time. The new school housed grades first through eighth.

Placid became part of the Epworth-Peosta-Placid merger in 1968, and in 1993 that group merged with Farley-Bankston to form Seton Catholic Elementary School system.

St. Patrick, Epworth: 1935-2009
Epworth was a mission parish, served by the pastor at Placid, from 1879-1935. After the establishment of St. Joseph School in Farley, the Sisters of the Presentation from there attended to the catechetical needs of the children in Epworth.

With the opening of the parochial school in 1955, four Presentation Sisters were assigned to elementary grades. Students in St. Patrick School had the advantage of association with several outside groups. The seminarians from Divine Word College Seminary worked with seventh and eighth grade students in a kind of “Big Brother” relationship. In 1960 students were able to receive piano and organ lessons from the music teachers in the Farley center. The Dubuque County schools provided the services of a county nurse, a speech therapist, a psychologist and a special education director.

In 1968 the Epworth-Peosta-Placid merger meant that the Epworth school was no longer a separate entity. By 1993 it became necessary to consolidate further and the Seton Catholic Elementary School system was created. Grades kindergarten, first and second were assigned to the Epworth building.

In addition to the school connections, Presentation Sisters also helped staff the Divine Word Spirituality Center in Epworth from 1993-1996. Sister Julia Wingert assisted in this endeavor.

The last Presentation, Sister Mary St. James Lickteig, left the system in 2009, ending the era of Presentation presence in the area schools which began in 1887 at St. Joseph School in Farley.