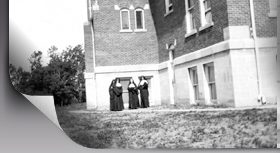 “Nestled in the rolling hills of northeast Nebraska, the town of Emerson has the distinction of being located in three counties.  The largest western section is in Dixon County, while the northeast part is in Dakota County, and the southeast part of town is in Thurston County.” It was established as a junction of the Chicago, St. Paul, Minneapolis, and Omaha Railroad in 1886, according to a 2002 article in an unidentified newspaper.

It was established as a junction of the Chicago, St. Paul, Minneapolis and Omaha Railroad in 1886, according to a 2002 article in an unidentified newspaper.

Sacred Heart School in Emerson was one of four new missions established by Mother Benedict Murphy in 1919. According to her annals, “Ready for occupancy (in late August of 1919) on the Sisters’ arrival was a neat brick convent and school erected under the supervision of the pastor, Father Burke,” with the approval of the bishop, Most Reverend Jeremiah Harty. The members of the first community to occupy the new building were Presentation Sisters Mary Zita Lynch, Davidica Henrich, Raymond Keville and Boniface Rieman.

According to the Presentation Annals by Mother Benedict Murphy, “In September the schoolrooms were filled to capacity by a band of responsive, courteous pupils. Additional teachers were soon required and the complete high school department was added (academic and commercial work).”

Mother Benedict continues, “Sacred Heart School maintained the high educational standard which marked its establishment…” until 1940 “when Mother Perpetua Ryan summoned the sisters home to Dubuque.” During the 21 years that the Presentation Sisters operated the school, they provided room and board for 30 students each year.

Sister Caroline Buscherfeld had personal experience with the boarders, having cooked for them, as well as the sisters, during her time in Emerson from 1928-1940. Students recalled that she always had fresh bread with syrup on it, and her chocolate cake with white frosting was superb.  However, it seems that they had baked beans “a lot.”  Boarders were expected to clean the tables, do the dishes, dust floors, clean blackboards and erasers and be quiet and sleeping by 9:30 p.m. They loved it when Sister Anne Uhl played the piano and they all danced.

There was never a lack of food for the kitchen since parents who could not afford the tuition paid in-kind with whatever they could bring: fresh-baked bread, homemade butter, dressed chickens and anything their gardens and orchards produced.

A parish brochure found in the archives describes the situation in Emerson in 1937 when rain was in such short supply that upon returning from walks the sisters found themselves covered in dust.  The corn crop that year yielded 40 bushels per acre. Some of the sisters tell of the living conditions when water froze in the wash bowls, and snowbanks sifted in through the door.

Sister Eunice Kane spoke at length of the grasshopper infestation which “made lace of the curtains” and left the wash on the line covered with “grasshopper tobacco juice.”

A former student recalled that “Sister Calasanctius would take our class over to the church to make a visit or say the Stations. When we were done, we would all kneel and recite the Litany. Sister knew it by heart and this impressed me.” In such ways the faith was sustained even in the harshest weather conditions.

It is that same faith which is still alive in Sacred Heart Parish in Emerson today, according to its website.