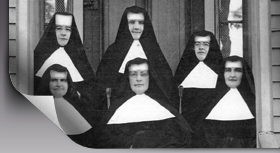 The Presentation sisters began their ministry in Elkader, Iowa, on August 25, 1885. The Sisters of Charity, BVM, who had spent 17 years in the school, had withdrawn due to increased commitments elsewhere. According to Mother Benedict Murphy’s Annals, “Bishop Hennessy immediately requested Mother Patricia to send sisters to replace them.” Mother Patricia sent Sister Mary de Chantal Heiser and two companions, Sisters Mary Gertrude Hanlon and Alphonsus Green. They were described as “women of good sense and judgment.”

“Rev. Fr. Quigley, a man of advanced years…was pastor at Elkader. A small frame building served as convent and school when our sisters first occupied the place to continue the work of education.” The convent occupied the basement, while first floor housed two school rooms: the “little” room where the beginners started, and the “big” room to which they later advanced.

There were early concerns that, having replaced the well-liked and respected BVM sisters, the Presentation sisters might encounter some resistance and hard feelings. They were received with warmth, however, and experienced the “gracious consideration and friendliness typical of the people of Elkader.”

A sense of humor helped ease the loneliness of the three members of the original community, who especially liked to tell the story of an incident involving Father McCulloch.

Upon visiting the Church one day to pray, the sisters discovered an elderly retired priest, shoes and stockings removed, feet on the pew ahead of him, absorbed in prayer. Suppressing their giggles, they remained to pray, and later recalled the years spent by Father McCulloch as a pioneer priest tramping the prairies on the frontier. They concluded that God wouldn’t mind his bare feet, which must have been worn out from his travels.

Upon the death of Father Quigley in 1886, the new pastor, Father John F. Reilley, undertook a much-needed renovation of both convent and school. With more space and added enrollment, Sister Mary Josephine Howley joined the original group of three, followed by Sisters Mary Veronica Mulgrew and de Pazzi Curtin in 1888 and 1889 respectively. In 1889 and 1898 further additions to the building provided space for more students, and even allowed the sisters to open a limited boarding school for girls.

By 1911, Father Reilley, pastor at the time, had erected a two-story brick building to serve as the school, leaving the sisters in the privacy of the convent. Grade and high school curriculum matched and even exceeded that offered in all small parochial schools at that time, with Father Reilley providing college preparatory classes in addition to the regular course of study.

The new 1911 building provided room for increased enrollment, and a full course of high school studies by 1925. A year later the St. Joseph High School was recognized by the Iowa Committee on Secondary Schools and placed on the list of accredited schools in Iowa. Further program expansion into the area of athletics was made possible by the work of Father James Taken, who remodeled the old stone church to serve as a parish hall and gymnasium. The church and parish hall were later listed in the National Register of Historical Places.

In later years, one of the young boys who had graced the halls of St. Joseph’s grew up to be Bishop Francis J. Dunn, who became Auxiliary Bishop of the Archdiocese of Dubuque in August of 1969.

According to the parish history, published in 1981, 23 young women from Elkader entered the convent: 18 became Sisters of the Presentation, and five joined various other communities.

St. Joseph School closed in 1969. According to the Clayton County Register (February 13, 1969), reasons for closing were listed as “financial pressures, a decrease in teaching religious and the need for a more efficient school system.”

After the closing of the school, Presentation sisters continued to minister to the people of the parish by maintaining a religious education program there until 1975.

A letter from the Burlingame Family, dated February 1969, says of the sisters who taught at St. Joseph School in Elkader: “For many years the Presentation sisters have taught our children in the grades and supported them in athletics. They have lived among us ‘as poor yet enriching many’…none of us care to have faithful friends leave.”

Two years ago Presentation presence returned to Elkader when Sister Carla Popes began ministering at St. Joseph Parish. She helps with life-long faith formation classes and guides parents and students together as they prepare for the sacraments of initiation. "It has been a wonderful gift walking with those who remember the sisters. We, too, have received the blessings of these wonderfully generous people," comments Sister Carla.

Sister also ministers as the director of religious education in the Sacred Heart Parish in Volga, Iowa; and pastoral associate at St. Mary Parish in Strawberry Point, Iowa.