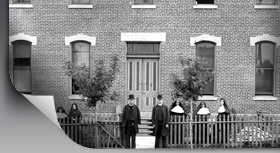 As one who has walked the halls of St. Columbkille School from kindergarten to 12th grade, it is my privilege to muse upon its beginnings and early history.

In October 1874, Mother Vincent Hennessy, Alice Howley (great aunt of Sister Anna Howley), Ellen Ahearn and Kate Reide left Ireland arriving in Dubuque to find that no place had been prepared for them to live. Thus these four women stayed with the Visitation Sisters at their convent located on West Third Street near the Cathedral Parish of St. Raphael.

In January 1875, the sisters traveled by sleigh to Key West to move into the house the pastor had planned as a rectory. By February of 1875, classes were held in the convent parlor. In 1876, some of the sisters began teaching in a new educational foundation at Western Dubuque, now St. Anthony School and Parish. In 1878, Archbishop John Hennessy announced that a convent would be built for the sisters in a quiet suburban section of Dubuque known as “West Hill” and that a school for the children of the mill workers and miners who resided there would be operated by the sisters.

In September of the following year the convent/school on West Hill, presently known as Rush Street, was not completed, so classes were temporarily held in a vacant house on 244 South Dodge, what is now Bryant Street. A double house, still standing today, is the original site of the Presentation sisters’ school. On December 9, 1879, the sisters moved from Dodge Street to the West Hill location. The next day Mother Hennessy and the sisters from Key West arrived with a farm wagon load of furniture and moved into the new building which served as novitiate, motherhouse, school and convent. The school was divided, the lower floor for boys and the upper floor for girls. Classes officially began in the new facility on December 15, 1879. Archbishop Hennessy came for the dedication on July 19, 1880, and announced the school be called St. Vincent in honor of Mother Vincent Hennessy who had died earlier that year. The enrollment in 1880 was 120 students who paid 25 cents per month which formed the basis of the sisters’ monthly income. Since there was no parish support, all expenses of the school and upkeep of the building was taken care of by the sisters.

On Candlemas day in 1880, Father Garret Nagle, a distant relative of Nano Nagle, foundress of the Sisters of the Presentation, walked up Dodge Street from the Cathedral with “monstrance, cope, veil, thurible, incense and incense boat” on a very cold day so the residents of West Hill could, for the very first time, have Benediction of the Blessed Sacrament and blessing of candles. The West Hill residents could now forego the tiresome trip down the hill to the Cathedral. West Hill eventually became St. Columbkille Parish in 1887.

From 1879 to 1909, St. Vincent School served as a day school for local Catholics. With the construction and dedication of the new motherhouse for the sisters located at 1229 Mt. Loretta Avenue in 1909, St. Vincent became St. Vincent Academy for girls, as well as a boarding school serving students from much farther away, even some from out of state.

In 1914, the number of resident students had outgrown all available space. An addition to the building was planned that consisted of private rooms, a chapel, an infirmary, a music room, and a dining room. The enjoyment of the new building was short lived, however, as it was destroyed by fire on February 14, 1919. Fortunately, though, it was soon rebuilt and remodeled with the finances of the sisters.

In 1930, Mother Mary Aquin sold the school building to St. Columbkille Parish. The pastor, Right Reverend James J. O’Brien, changed the name of St. Vincent to St. Columbkille School and Archbishop Francis J.L. Beckman granted permission for boys to attend the school. The sisters’ salaries were then paid by the parish.

Sixty-seven women have entered the Presentation community from St. Columbkille Parish. Sister Mary Bernard Roddy was the first vocation to the Presentation sisters on West Hill. Sister Mary Genevieve Burke would be considered the first vocation from St. Vincent Academy. I feel honored to have walked the halls of St. Columbkille and am grateful to be one of the 67 women.