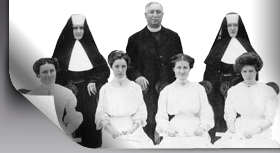 When in 1887 Bishop Hennessy requested Mother Patricia to assume control of two schools built that year, Danbury and Farley, Iowa, she had only four sisters available for both places. No happy anticipation was hers, facing that difficult situation. “Send two sisters to each place for the present,” was the Bishop’s apparently easy solution of the problem. With ideas of her own regarding regular community life, Mother Patricia, contrary to her good judgment, complied reluctantly with the Bishop’s request.

Although named Superior of the little outgoing band, childlike Sister Mary Angela Crowley was anything but a support to her lone companion. “Sister Mary Cecilia,” she sobbed at parting, “if I’m alive when we reach Danbury, I’ll give you something nice.” Not only did she survive the trip, but she spent many happy years in Danbury, loving its splendid people and calling the place home. When Sister Mary Cecilia chided her neglect of reward for safe transportation, Sister Mary Angela would come back with, “You’re in Danbury now. What greater recompense could you wish?” (From Annals of Mother Benedict, pp. 44-45)

St. Patrick School began in a two-story, wooden, eight-grade school with an enrollment of 85 students, some of whom were boarders. By 1890 the school extended to 11 grades.

Sister Mary Angela, the first postulant received after the founding of the community in Dubuque, served Danbury from 1887 until 1898. Shortly after leaving Danbury she was elected Mother Superior of the community. While in this role she was visiting Danbury in 1906 when she contracted pneumonia and died in the Sioux City hospital.

In the early 1900s, plans were made to build a new four-story brick school (with full basement) since the academy had become too small. The new school was ready for classes by fall of 1908.

In 1951, the two schools of the city (St. Patrick and St. Mary) were merged. The grade school became “St. Mary’s” and the high school became “Danbury Catholic.” The Sisters of the Presentation left (having been asked to staff Storm Lake instead of Danbury) and the Sisters of St. Francis of Mt. St. Clare of Clinton, Iowa, staffed the schools.

In 1997, the Presentation sisters again started serving Danbury Catholic when Sister Jane Conrad joined the staff. She was joined by Sister Ellen Mary Garrett in 1998, who served there through the spring of 2010.