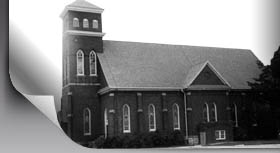 St. Matthew Parish in Clare, Iowa, was created to serve the Irish immigrants who lived along the banks of Lizard Creek. The population was mostly rural in the beginning with later parishioners working in Fort Dodge, Iowa, at various establishments. The parish was named after its first pastor, Father Matthew Norton.

Sister Mary Benedict Murphy’s annals describe the establishment of the school in 1892:

“Having served the Presentation sisters as chaplain while assistant priest at St. Raphael Cathedral, (pastor) Father (Matthew) Darcy learned to esteem them for their efficient and successful school management. Therefore, when in need of teachers for his prospective school, his favorite community, the Presentation sisters, were invited to assume control.”

Sisters Mary Alacoque and Scholastica Murray were the first sisters to arrive in Clare. They lived and taught in the former rectory until a building was constructed which contained the school, convent and chapel. This served the needs of all grades until 1961 when the high school closed. A new L-shaped building, erected in 1966, divided school and convent into two adjoining wings, providing a separate space for each. By 1989 an enrollment of 54 students in grades K-8 caused the closing of the school.

The closing of the high school in 1961 necessitated the transfer of the upper grades to St. Edmond Catholic High School in nearby Fort Dodge. Long-time pastor, Father John W. Cullen, worked to keep the older students connected with the parish by establishing a high school chorus which performed at community events and enhanced the parish liturgies. He also met the Fort Dodge bus every morning and regularly inspected students’ report cards to “encourage” them in their schoolwork.

Former teachers Sisters Rosanne and Anthony Rottinghaus recalled that liturgical celebrations were at the heart of the parish. Young people were expected to be in attendance with their parents for such things as Holy Week services and Rogation Days.

All was not serious business, however. Two of the sisters were known to go trick-or-treating in costume. One year they were scolded by a mother who said, “You’re too old for this. Go home and behave.” Imagine her chagrin when her children told her who the trick-or-treaters were!

On another occasion, one young man caused quite a stir while practicing his solo for an upcoming program by suddenly announcing, “Sister, the curtain’s on fire!” The heat of the lights had ignited the curtain, which ended the practice for the evening.

In addition to teaching, the sisters were involved in religious education classes, student retreats, prayer services at nearby rest homes and participation in local area prayer groups.

Sister Matthew Cunningham, who grew up in Clare, has fond memories of her piano teachers, especially Sisters Mary Leonarda Leonard, Anita Boland and Cecelia Loes. “I started piano lessons when I was six years old. Thanks to these women I had a thorough background in music, as a piano student and as a participant in choral work, by the time I graduated from high school.”

Growing up in a small town meant everyone knew everyone and they all took care of each other. Sister Matthew remembers that people used to say “Clare was so small you could only see it if a car wasn’t parked in front of it. It was also a very Catholic community and you saw everyone at church on Sunday mornings.” Another favorite gathering place in Sister’s memory was Chalus, a combination drug store, soda fountain and sandwich shop, which was much missed when it closed.

The last Presentation sisters to serve at St. Matthew’s were Sister Mary Jane Conrad and Sister Alice Marie Crilly, who taught primary grades and music respectively. They left Clare in the spring of 1989.