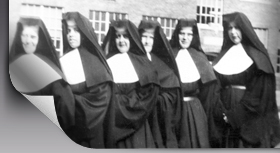 “Father (Thomas) Davern organized the parish men to assist in the building of St. Cecelia Academy. The basement area of it was dug by horses pulling slips and fresnos along with many hands digging with spades and shovels. The farmers would drive their teams to town daily during the week with feed to sustain the animals at noon. An organized group of ladies prepared the eats at the noon meal. Much of the food was donated by all concerned … Then the contractors who steered the building process also used the parishioners who would volunteer their assistance.” Memoirs of St. Cecelia Academy by Floyd T. Bode

The spirit of cooperation exhibited in the building of St. Cecelia Academy in 1927 continued to be a hallmark of the parishioners in the Algona area. Through several periods of restructuring, the school system has continued to be maintained by the generosity and work of those who have seen three and four generations of families educated there.

Bishop Garrigan High School opened in 1959, supported by parishes in Algona, St. Joseph (Bode), Wesley and Whittemore. At that time St. Cecelia and St. Joe merged their elementary students who attended at either center. Several other communities of sisters taught with the Presentations until the center at St. Joseph closed in 1991.

Kindergarten was added in 1979, the same year that elementary students from Wesley and St. Benedict entered the system and St. Elizabeth Ann Seton became the new name for the Algona center. Students later came from several other areas as their home centers closed or their parents desired Catholic education at the high school level which was not available in their hometown.

Preschool began in 1982 with four-year-olds. It has expanded to include three-year-olds, kindergarten prep and all-day class and day care options. A new middle school wing was built in 1991, and the original Academy building was demolished to make way for a parish center in 2015.

The Sisters of the Presentation continued to staff the school system and maintain the high standards of education which parents expect and deserve. They were also active in parish ministry, serving as coordinators for religious education as well as for the Rite of Christian Initiation of Adults.

Sister Annette Skyles, middle school teacher at Seton until her retirement in 2004, has fond memories of her time in Algona. She especially remembers the family atmosphere created by the faculty and staff. Their support of the sisters, and their creative preparation for liturgies, stand out in her memory, along with their support of her in nominating her for one of the first Bishop’s Awards for Excellence in Teaching.

Having the distinction of teaching in both the St. Joseph and the Garrigan centers, Sister Janet Stelken recalls her work with the confirmation candidates who were juniors in high school. The incorporation of students, sponsors, teachers, pastors and parents in retreats and discussions, created a community of faith which enriched the lives of all participants. She welcomed the support offered by the different groups, and credited this with enriching the program for all involved.

In 2010, Sister Hermann Platt left the Seton Center. Sister Janet Goetz officially retired from the Bishop Garrigan center in 2015, although she continues to serve by volunteering at the school and in the parish. Over the years, 145 Sisters of the Presentation served in the Algona area.