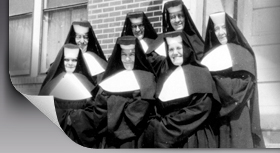 The school opened with 24 boarders (both boys and girls), 65 day students, and 30 music students. Between 1919-1929, eight sisters served in the school. Classes were offered for grades 1-8, with the addition of some high school grades the first year.

Sister Mary Xavier Evans led the little band of sisters in their first endeavor in the Diocese of Denver. Listed in the annals as her companions were Sisters Mary Antonio Murphy, Evarista Powers, Leonarda Leonard, Innocentia Sanner and Rose Jochum. Pastor Reverend Louis Groham, described by Sister Innocentia later as “a very kind man,” introduced the sisters to the parish and settled them into their new home.

About her first mission experience in Akron, Sister Innocentia recalled that the sisters had a real community spirit, which helped alleviate the feeling of isolation for those who were so far from their Iowa roots. She also remembered harboring some people overnight when a storm arose after a school program directed by Sister Mary Antonio. Weather evidently could be a problem, though the climate was generally mild.

Sister Mary Leonarda Leonard had this to say about the weather:  “It was never very cold and there were few storms; sunshine almost every day. We had to make our own sunshine when we came back to Iowa.” She enjoyed the people, the students and the boarders during her 10 years in Akron.

A transplant from Iowa, Sister Mary Josephine Kennedy spent 1919-1921 as a boarding student at St. Joseph. Her family had purchased some land 18 miles from school, and the law required that they live on the land for two years in order to claim it. The Kennedys later returned to Iowa.

Depression conditions, according to the Parish Yearbook, caused the closing of the school. Other factors mentioned in the annals included the increasing need for more sisters to staff the schools closer to home, and the fact that, for the last two years that the sisters were there, the parish had no resident pastor; hence there was no opportunity for daily Mass.

In testimony of the enduring appreciation for the work of the sisters, a mural and name plaque were placed in the Church in 1955 to honor Sister Mary Antonio Murphy. The plaque reads:  “With prayerful gratitude, affection and esteem, this mural is dedicated to the memory of Sister Mary Antonio, Sisters of the Presentation, presented to St. Joseph Church, Akron, Colorado, June 13, 1955, by her former pupils and associates.” Presiding at the Mass and ceremony was Right Reverend Monsignor Joseph R. Koch who had been pastor at St. Joseph Church during 1922-1928, the years that Sister Antonio was principal.

Presentation Annals of 1932 sum up the history of the sisters’ work in Akron, Colorado, and attest to the fact that their influence extended beyond the school walls. “A fertile field for Catholic action claimed the unstinted efforts of the Presentation apostolate of religious instruction. Return of lapsed Catholics and more than a few conversions attest the impress of Presentation sisters teaching there.”